Black Lives Matter, its Meaning and its Mission
by Andre Gee 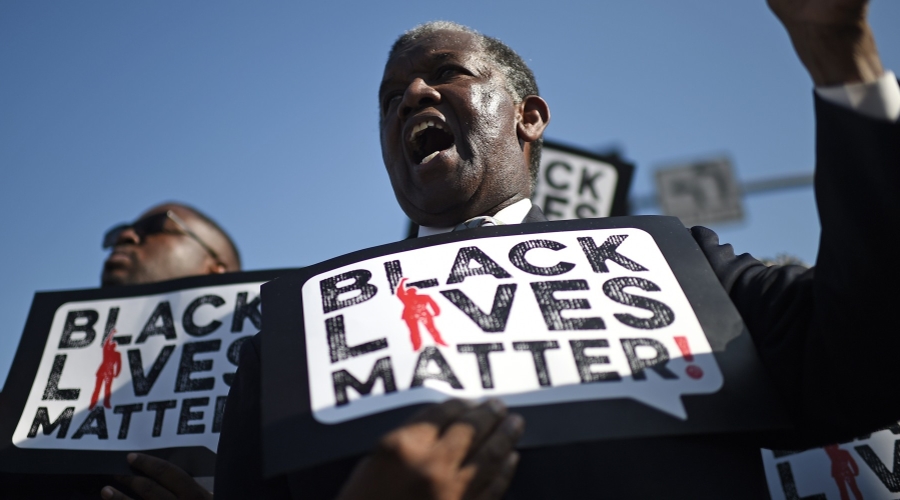 In April, New York Activist Tony Herbert sarcastically referenced the Black Lives Matter organization in a video about 17-year-old Ta'Jae Warner, who was beaten to death in New York by “people that look just like her.” In March, football legend and unlikely social commentator Ray Lewis made a video lamenting “Black-on-Black” crime and pondering, “if Black lives truly matter.” Both men are the latest in a cacophony of critics of the Black liberation organization.

Since Black Lives Matter was founded by three Black women in 2012, they've gained a status as the preeminent social movement of the millennial generation through relentless advocacy for Black victims of state-sanctioned violence. An unintended consequence of their rise is that “Black Lives Matter”--the group's name and ubiquitous mantra—is being grossly misinterpreted by those who don't fully comprehend the organization's methodology.

There are conservative media outlets such as Breitbart who attack any extremist who's ever used the #BlackLivesMatter hashtag to the organization in attempts to discredit it. There is a chorus of people who spew the term “all lives matter” to combat the movement. There are even rappers who use “Black Lives Matter” to justify why they're squashing sophomoric “beef” with other rappers.

How much is the constant co-opting and cannibalizing of the phrase by the injudicious and willfully ignorant hurting the organization's social capital? Is the ubiquity of Black Lives Matter hindering the effectiveness of the modern Black social justice movement?

In Black communities throughout the country, there is a groundswell of Black Lives Matters detractors who feel the group doesn't rail against internal violence with the same vigor in which they condemn homicidal cops.

His pathology is all-too common among residents of economically deprived communities. Abraham Maslow's hierarchy of needs hypothesizes that a person's desire for safety takes precedence over everything but basic physiological needs. That appears to be the case for Americans like Reed, who's proximity to crime-ridden communities and mourning families in Louisiana influences his perception of internal violence as a self-inflicted scourge of the Black community.

This mindset places community activists like he and Warner at odds with Black Lives Matter. In their eyes, the young activists should devote some of their actions to anti-violence demonstrations. Writer Charles D. Ellison recently crafted an article entitled “Black Lives Matter needs to address non-police crime, whether it wants to or not.” In the article, he notes “that unnamed Black elected officials” have ”a sense that the national discourse on black life swerves around” the notion of so-called Black-on-Black crime.

The Black Lives Matter organization has addressed its desire to halt state-sanctioned “genocide,” but refuses “to locate [the] crime problem as a problem of black pathology,” according to their official site. The organization's founders and chapters are intent on uprooting the figurative tree of systemic oppression, but many want them focused on chopping down branches.

Chicago activist Chico Tilman poignantly noted in a Washington Post piece that, “when a police officer kills an individual, that is a singular event that brings the community together in common cause,” but “in other cases, the causes of violence are often internal things that divide the community.” An extension of that divide exists when it comes to deciding how to curb the violence.

Many community organizations, elected officials and prominent activists are unopposed to harsher gun control laws as a mean of stopping the violence. That mindset is an antithesis to Black Lives Matter, who is focused on laxer policies. This sticking point keeps Black Lives Matter chapters from complete ideological solidarity with their local nonprofits. Additionally, it could make members reticent to participate in demonstrations where the concept is broached.

The divide has vague parallels to the '60s and '70s, when “Black Power” militants criticized the concept of nonviolent resistance as a means of abolishing systemic oppression. Their lack of harmony arguably hindered the collective power of the civil rights movement. The difference today however is that these organizations are not diametrically opposed to Black Lives Matter. Even the most conservative community groups aren't specifically pushing to put people in jail; they want the same reformation of their communities that Black Lives Matter chapters do.

In a country full of immense oppression and bigotry against people of color, it's strictly more efficient for groups to have a narrow focus. If an organization was to acquiesce to the desires of every group that felt they were oppressed, it would likely become as rudderless and impotent as many believe occupy Wall Street to have been.

Black Lives Matter started as a movement against state-sanctioned violence, not gun violence. Holding their slogan against them and implying that victims of street violence are irrelevant to them stirs unnecessary resentment in a time when solidarity is crucial. It's to be noted that Black Lives Matter, started by women who identify as Queer Feminists, frequently advocates for people who rarely see demonstrations for them—unless it's done by them.

For instance, the #SayHerName movement was started specifically because the deaths of Black women at the hands of police were lost in the young-Black-male-centric coverage of police brutality. The continued violence against transgender people is even less discussed. Black Lives Matter members could easily reciprocate consternation for the aforementioned nonprofits that say nothing about those issues. They don't however.

Why don't these activists do their best to resurrect “stop the violence,” “increase the peace,” or “self-destruction” as the calling card of an anti-gun violence movement? Until then, they will appear foolish and short sided for expecting a movement which has clearly laid their ground rules out, to be swayed by their misconceptions.